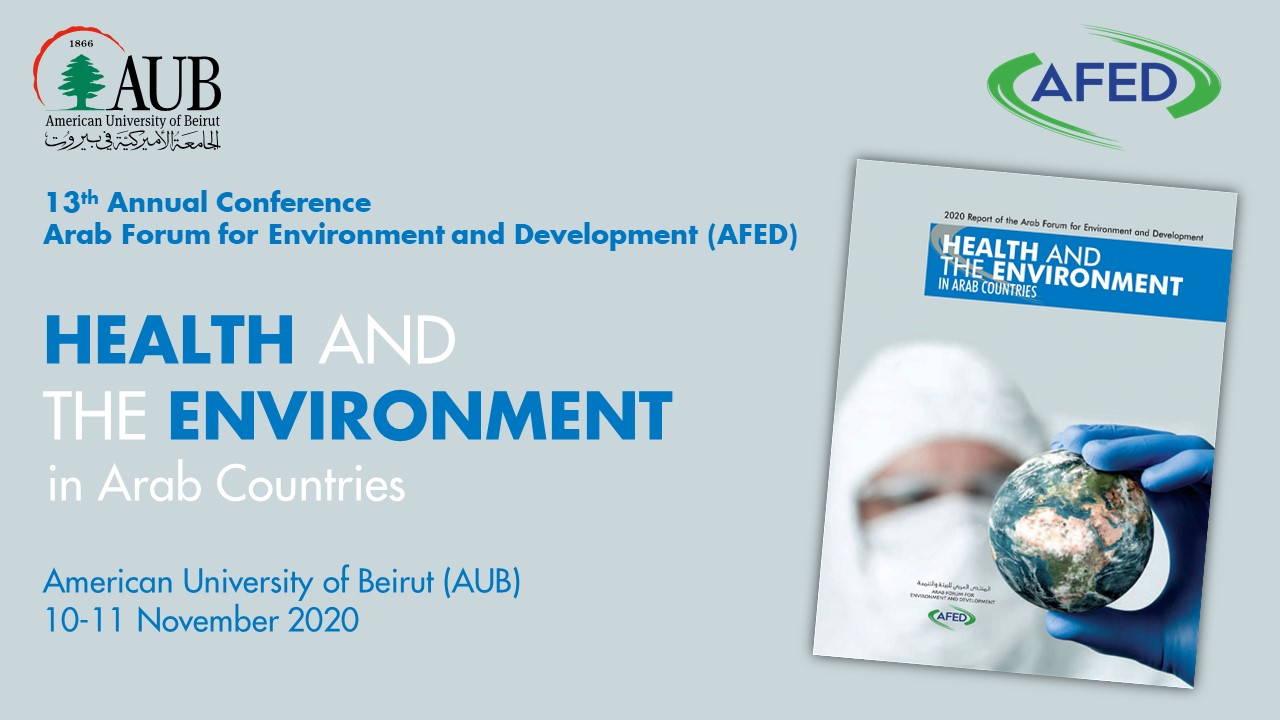 HEALTH AND THE ENVIRONMENT IN TIMES OF CORONA

Our Host, Dr. Fadlu Khuri, President of the American University of Beirut,

Dr. Khalid Al-Ohaly, President of the Arabian Gulf University and his colleagues, joining us from Bahrain,

Welcome to AFED’s first virtual conference, which we hope will lead to concrete recommendations and trigger actual positive policy changes and action, in the health and environment arena.

We have with us today 650 registered delegates from 46 countries, joining via Webex, some in hubs and the proceedings are being streamed via AFED and AUB social media platforms.

Although the environment has always impacted human health and wellbeing, the interconnectedness between the two is especially highlighted now, with the world in the grip of the coronavirus pandemic. Given this context, the topic of the 2020 annual report of the Arab Forum for Environment (AFED), Health and Environment in Arab Countries, is particularly timely and relevant. One key observation is that the pandemic exposed multiple vulnerabilities of the Arab healthcare systems.

Producing the report was in itself a challenging endeavor, not only due to the stressful working conditions created by the pandemic, which put limits on normal interaction, but also due to the consequences of the financial collapse in Lebanon on AFED’s operations. This was compounded by the Beirut port explosion on 4 August 2020, which badly affected the AFED Secretariat and its partners in Beirut, damaging our offices and facilities, besides the human and economic tragedy felt by our staff. Combined with the unsettled situation in the region, this has resulted in a disturbing drop in funding from traditional partners and sponsors, threatening the continued existence of AFED itself.

This report is the 13th in the series on the State of Arab Environment, launched by AFED in 2008. The series, which has highlighted environmental challenges and recommended solutions, has inspired policy changes, knowledge sharing, and actions across the Arab region. It has covered major topics, including climate change, water, energy, the green economy, our ecological footprint, sustainable consumption, financing sustainable development, and environmental education, among others.

The AFED 2020 report discusses the main environmental drivers that impact various aspects of human health in the Arab countries, and proposes an action plan leading to the region meeting SDG Goal 3. These recommendations are placed within an integrated context of sustainable development, by tackling health in terms of social, economic and environmental aspects. The report’s seven chapters deal with the relationship between health, water, air, waste, ocean pollution and climate change, as well as progress and obstacles in achieving the environmental health content of the SDGs.

AFED wishes to thank all institutional partners, experts and researchers who contributed to this report, including universities, international organizations and major players in the environmental health domain. Academic AFED members among universities across the Arab region played key role in developing the report. The core content partners were the Faculty of Health Sciences at the American University of Beirut (AUB), which is also hosting the conference, as well as researchers from Arabian Gulf University in Bahrain, Cairo University and Alexandria University in Egypt. The report also received major contribution from the WHO regional Centre for Environmental Health Action (CEHA).

Special thanks go to the sponsors who supported the production of the report, mainly the Kuwait Foundation for the Advancement of Sciences (KFAS), the Islamic Development Bank (IsDB) and the UN Food and Agricultural organization (FAO).

On behalf of the authors, I am pleased to present the main findings of AFED report on Health and the Environment in the Arab Countries.

-          Diseases most driven and impacted by environmental causes in the Arab countries include cardiovascular diseases, diarrheal diseases, respiratory infections and cancers.

-          The COVID-19 pandemic has highlighted the lack of access to safely managed water, sanitation and hygiene (WASH) services.

-          Wars and refugees increased the stress on the already scarce water resources.

-          Countries should develop and implement water and sanitation programs, commit to financing, and advance the enabling conditions that make strong policies, laws and plans possible.

-          Significant rise in the number of deaths attributed to indoor and outdoor air pollution.

-          The overall disease burden due to air pollution is increasing, with a higher prevalence of cardiopulmonary disease, cancer incidence, and more cases of asthma.

-          Coronavirus gave an added sense of urgency to enhancing air quality, as studies have shown evidence of the relationship between air pollution and the increase in and acuteness of cases.

-          Need to improve health risk assessments based on air monitoring and modeling studies, which would provide Arab policy-makers with the right control tools to reduce the public health impact of air pollution.

-          Solid waste generation has been increasing at an alarming rate in the Arab region due to population growth and changing production and consumption patterns.

-          53 percent of all generated waste indiscriminately disposed of in an unsanitary manner.

-          The COVID-19 pandemic has increased the use of single-use items such as masks and gloves, generating more hazardous waste.

-          Replace outdated waste facilities with new ones that can reduce associated health risks and halt the dispersion of pollutants.

-          Circular and 3R-centric approach (Reduce-Reuse-Recycle) to waste management is critical to reduce the harmful impact of waste on human health and nature.

-          Direct discharge of untreated sewage into coastal zones, offshore oil exploration and extraction, and microplastics have impacted the health of the Arab population.

-          Arab countries produce an estimated 12 billion m3 per year of wastewater. Only 60% treated. Half of the treated water is re-used. All the remaining is discharged, mainly in the sea.

-          Untreated sewage can lead to the spread of pathogens that cause disease in humans.

-          Oil exploration, extraction and transport cause major pollution to the marine environment, and has led to heavy metal contamination of fish that are subsequently consumed by humans.

-          More research is needed to explore the direct impact of the state of the marine environment on human health in the Arab region, with a focus on pathogens, toxin transfer to humans and antimicrobial resistance.

-          A 1°C increase in average temperature is expected to lead to a 3 percent increase in mortality from all causes.

-          Arab countries need to gain a better understanding of the various factors influencing the impact of climate change on health in order to design effective mitigation and adaptation strategies, catered to country-specific situations, with direct and clear effects on the Arab population’s health.

Overall, exchange of expertise in health and environment-related disciplines across the Arab countries is needed, with regional cooperation intensified, encompassing emergency preparedness to face health and environmental disasters. Establishing a primary health care system, including health education, is an urgent task. Ultimately, regional strategies setting common goals to achieve the SDGs are required.

The AFED report demonstrates that a healthy environment is a prerequisite to healthy people.