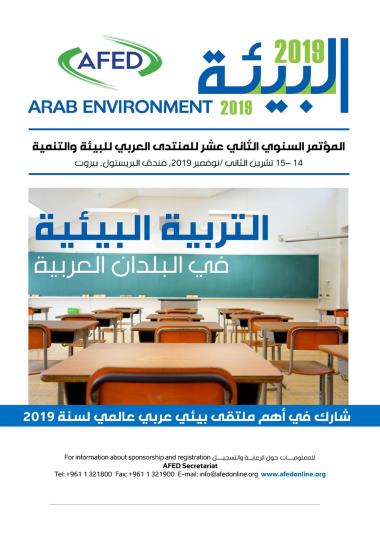 The Arab Forum for Environment and Development (AFED) announced that a team of leading scholars, working on its report on environmental education, have surveyed programs in schools and universities across the Arab countries. Based on analysis of the findings, recommendations to bridge the gaps will be submitted to an international conference organized by AFED on 14-15 November in Beirut.

AFED Secretary General and editor of the report, Najib Saab, said that the report, which is the twelfth in AFED annual series on the state of Arab environment, will provide the first comprehensive overview on environmental education in the Arab countries. Accurate data, he explained, is essential tool for policy makers. AFED had to entirely collect the data from original sources, as no updated and reliable information was available; even from organizations specialized in education and environment. AFED team of researchers collected data on school curricula from Arab ministries of education, and mapped all topics related to environment in different courses and grades. The collected data was analyzed in cooperation with researchers at the Institute of Environmental Studies and Research at Ain Shams University in Cairo.

Data on environment-related courses and programs was also collected by AFED from major universities in all Arab countries, and analyzed by a team at the University of Bahrain, under the leadership of its President, Dr. Riyad Hamzah. Professor Hamzah had surveyed the status of environmental education and research in Arab universities more than 10 years ago, and published results of his work in the first AFED report in 2008. While his first paper covered 35 Universities in 15 countries, the present one covers 57 universities in each of the 22 Arab countries. While major progress has been revealed, the first findings revealed slow pace of integration of the sustainable development goals.

Innovation in environmental education is the title of a chapter discussed by a team of researchers headed by Dr. Ahmed Gaber, professor at Cairo University. Dr. Gaber and his team developed especially for AFED report special indicators to monitor Education for Sustainable Development (ESD), alongside a bibliometric review and analysis of related research themes in the Arab countries.

A main ingredient of the report is a draft syllabus for an introductory university course on environment and sustainability, which has been developed by AFED team. A revised version has been prepared, based on an inclusive consultation process, which resulted in comments submitted by professors from over 25 universities. The syllabus will be incorporated in the report and discussed at the conference. Many universities have already shown interest in including the course, open to all students, either as mandatory or elective.

The report will also feature over 20 case studies, based on experiences, prepared by international and regional organizations, including UNESCO, OECD, Union for the Mediterranean (UfM), Islamic Development Bank (IsDB), Environment Agency Abu Dhabi (EAD), American University of Beirut (AUB), and Arabian Gulf University (AGU). The report uses science-based evidence to trigger a needed policy debate on the urgency of reforming the Arab educations systems in order to mainstream environment and sustainability issues in their curricula.

The findings of the report will be presented and debated at the 12th AFED annual conference, which will convene in Beirut on 14-15 November, hosting over 30 top-notch speakers. Some regional and international organizations will be presenting their work and vision regarding education for environment and sustainability. Previous AFED annual reports covered major challenges in the domain of environment and sustainable development, including climate change, water, energy, food security, ecological footprint, green economy and financing sustainable development.