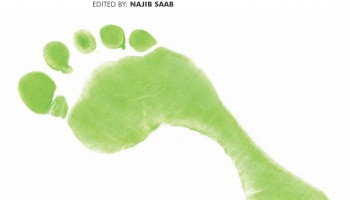 Survival Options-Ecological Footprint of Arab Countries is the Fifth in the series of annual reports produced by the Arab Forum for Environment and Development (AFED) on the state of the Arab environment. It examines sustainability choices in Arab countries, based on a survey of people’s demand of natural capital and available supply.

The primary aim of the AFED annual reports is to foster the use of science in policy and decision-making in Arab countries. This is a manifestation of AFED’s mission to advocate prudent environmental policies and actions based on science and

The present report comes as a logical addition to the sequence, since it discusses potential paths to sustainability based on ecological constraints. As a basis for the analysis, AFED has commissioned the Global Footprint Network, the world leader in  this field, to produce an Arab Ecological Footprint and Biocapacity Atlas using the most recent data available. The Atlas covers the 22 members of the League of Arab States, as region, sub-regions and individual countries.

The findings indicate that Arab countries’ demand for nature’s products and services amounts to more than twice what ecosystems in these countries can supply. This imbalance between domestic supply and demand for ecological services places a limit on future growth and wellbeing.

This report is an attempt to go beyond pointing to the signs of deterioration, towards providing alternative paths to development in a positive spirit. The analysis focuses on the challenges posed by the state of food security, water and energy, while considering main drivers such as population and patterns of production and consumption. Ultimately, it prescribes regional cooperation and sound management of resources as the main options for survival in a region characterized by stark variations in ecological footprint, natural resources and income.

• Arab Atlas of Footprint and Biocapacity